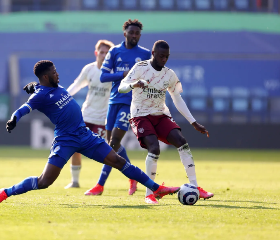 Arsenal have moved into the top half of the English Premier League standings after beating Leicester City 3-1 at the King Power Stadium on Sunday afternoon.
David Luiz, Alexandre Lacazette and Nicolás Pepé got on the scoresheet for the Gunners after Youri Tielemans had opened the scoring for the home team.
Kelechi Iheanacho, playing in a number 10 role, went the distance along with fellow Nigeria international Wilfred Ndidi.
To be absolutely fair, Ndidi had a good game in the first half but made two uncharacteristic mistakes, firstly he presumably fouled Pepe in the area in the 12th minute but the penalty was overturned after a VAR review and then handled the ball in the box for the spot kick that was correctly given on 45 minutes.
Former Arsenal striker Ian Wright thinks referee Paul Tierney and the VAR made the wrong call regarding the first penalty incident involving Ndidi and Pepe as the holding midfielder didn't make contact with the Ivory Coast winger.
Speaking on Premier League Productions at half-time, Wright said : "I thought that was a good decision but for them to take as long as they did I just couldn't see how they come up with that as a foul because I didn't see it as a foul.

In the race for the Champions League positions, Brendan Rodgers' team remain third in the table with 49 points before their next game against Burnley on Wednesday, March 3.
Ifeanyi Emmanuel
Photo Credit : lcfc.com
Copyright ANS