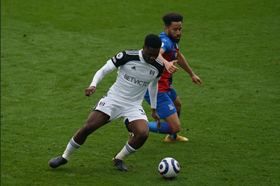 Fulham extended their unbeaten run to five matches in the Premier League after they were held to a goalless draw by Crystal Palace at Selhurst Park on Sunday afternoon.
Nigeria international Josh Maja had at least two chances to win the game for the Cottagers in the second half but his effort either went wide or was saved by the Eagles goalkeeper.
The impressive Bordeaux loanee squeezed a shot inches wide in the 66th minute and two minutes later Guaita made a huge save to prevent him from scoring from a close range header.
Chelsea academy product Ola Aina was one of four players of Nigerian descent that started for Fulham but made way for Antonee Robinson at half-time.
Manager Scott Parker revealed at the post-match conference that swapping the Super Eagle with the United States international was a tactical substitution and not injury-enforced.
In quotes carried by West London Sport, Parker explained : "I just thought we needed a little bit more down that right side and I thought it worked.

"It was nothing to do with Ola but Antoinee just gave us that little bit more going forward".
Of his 22 appearances in the Premier League this season, Aina has gone the distance in eighteen, scoring two goals.
Igho Kingsley
Photo Credit : fulhamfc.com
Copyright ANS