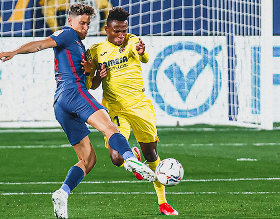 Unai Emery's Villarreal are still without a win after seven La Liga matches following their 2-0 loss to table-toppers Atlético de Madrid at the Estadio de la Ceramica on Sunday night.
Making his first La Liga start of this calendar year, Samuel Chukwueze was astonishingly named King of the Match despite the Yellow Submarine's defeat.
Playing on the right side of attack, the Nigeria international's pace and trickery caused problems for the Atlético de Madrid defence though sometimes his delivery into the box was poor.
Chukwueze made four key passes over the course of ninety minutes, more than any other player on the pitch.
Bereft of ideas, the Villarreal players were consistently looking for Chukwueze on the right but the visitors defence was not breached.
An own goal from Alfonso Pedraza separated the two teams at half-time, the former Spain U21 international putting into his own net after Savic's header was saved by goalkeeper Asenjo and the rebound hit the defender.
Villarreal were still in the game until the 69th minute when João Félix, on as a substitute at half-time, doubled Atlético de Madrid's advantage with a shot from the edge of the box.
Ifeanyi Emmanuel
Photo Credit : atleticodemadrid.com
Copyright ANS