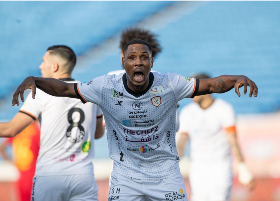 Former Manchester United striker Odion Ighalo scored a first half brace as Al-Shabab defeated Damac 2-1 in a Saudi Arabian Professional League match at the Prince Sultan bin Abdulaziz Sports City Stadium (Abha) on Monday afternoon.
The 2019 Africa Cup of Nations top scorer opened the scoring when he powered a downward header past the goalkeeper after a brilliant cross into the box from left-back Abdullah Al Zoari in the 12th minute.
Damac replied eight minutes later as Emilio Zelaya scored with a header of his own to make it 1-1.
Six minutes before half-time, Ighalo scored what proved to be the winning goal, guiding a header beyond the reach of Zeghba after a fine delivery from Fábio Martins.
In the second half, the former Super Eagles star thought he had bagged his first hat-trick in Saudi football but the goal was chalked off for offside.
In the third minute of stoppage time, Ighalo made way for Nawaf Al Abid .
The number 89 has been involved in four goals (3 goals, 1 assist) in five appearances since making his debut for Al-Shabab.
Ifeanyi Emmanuel
Copyright ANS