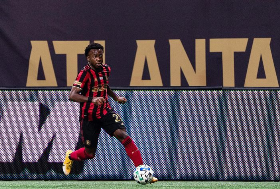 Atlanta United have blocked Nigerian-born defender George Bello from attending a United States U23 training camp ahead of the Concacaf Men's Olympic Qualifying Championship in Guadalajara, Mexico.
The left-back was named in the 31-man group announced by the United States Soccer Federation on Monday but the official website of Major League Soccer is reporting that Bello and his Atlanta United teammates Miles Robinson and Brooks Lennon would not be part of the training camp after their club declined to release them due to participation in the Concacaf Champions League.
Bello is considered a key player for Atlanta United, having started 20 matches in all competitions in the 2020 season.
United States U23 coach Jason Kreis says the defender not being in camp creates doubt if he will be named in the squad for the Olympic Games should the USA qualify for the competition.
The final 20-player tournament roster for the Concacaf Men's Olympic Qualifying Championship will be announced later this month.
Aged 19, Bello has one cap for United States senior team, playing the last 26 minutes of a 7-0 hammering of Trinidad and Tobago at the end of January.
Igho Kingsley
Photo Credit : atlutd.com
Copyright ANS
All rights reserved. This material, and other digital content on this website, may not be reproduced, published, rewritten or redistributed in whole or in part without prior express written permission from allnigeriasoccer.com