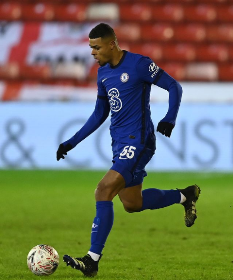 Faustino Anjorin was impressive in his first game of 2021 for Chelsea U23s as they were held to a 1-1 draw by Leicester City in a Premier League 2 clash on Monday night.
The England youth international of Nigerian descent has been part of the first team bubble since the appointment of Thomas Tuchel as coach of the Stamford Bridge outfit, missing three games in a row in the Premier League 2 against Arsenal, Derby County and Liverpool.
Two other players of Nigerian descent started at the Leicester City training ground; Bryan Fiabema for Chelsea and the 2002-born Leicester goalkeeper Chituru Odunze who spent three years at the Chelsea academy in the formative years of his career.
Sporting the number 10 jersey, Anjorin was denied the opening goal when he made room for himself and struck a shot from close range but the post came to Leicester City's rescue in the 25th minute.
Odunze made a brilliant save to prevent Livramento from breaking the deadlock in the 32nd minute, covering his near post and punching the ball away for a corner.
The breakthrough finally arrived for Chelsea in the fifth minute of first half stoppage time as McEachran was there at the far post to tap home after Anjorin put a brilliant ball across the face of goal.
In the 58th minute, Tyrese Shade leveled the scores with a simple finish after a defensive error by Chelsea.
Anjorin thought he had won it for the visitors in the 95th minute but saw his shot from just inside the box tipped wide by Odunze.
Ifeanyi Emmanuel
Photo Credit : chelseafc.com
Copyright ANS