...the complete Nigerian football portal
Subscribe
'I certainly do not rule it out' - PSV's Anglo-Nigerian winger wants to play for Netherlands if possible
Published: March 02, 2021 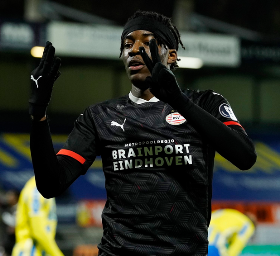 PSV Eindhoven winger Nonso Madueke has not ruled out the possibility of playing for the Netherlands in future, provided a change of association is granted by football's governing body FIFA.
Born in London, the highly-rated teenager became provisionally cap-tied to his country of birth when he represented to the Young Lions at the 2019 U17 EURO qualifiers but remains eligible to represent Nigeria through his father.
The Nigeria Football Federation are believed to be keeping tabs on Madueke with a view to call-up to the Super Eagles.
Signed from Tottenham Hotspur in the summer of 2018, Madueke could acquire Dutch nationality if he remains in the Netherlands for at least two and a half more years.
"Really ?! Is that possible ?! Wow, I really did not know that at all," Madueke said to PSV Supporter vis Voetbal Primeur.
"That would also be a great option. I really have a lot of admiration for Dutch football, which of course has come a long way at many major tournaments with a very talented crop coming up again.

"But, if I stay at PSV or in the Netherlands for at least two and a half years, in theory I could therefore also represent the Netherlands?
"I really feel completely at home here, so who knows how things will turn out in the future. If it is an option, I certainly do not rule it out".
Madueke is having a breakout season at PSV, scoring 8 goals and providing 8 assists in 24 matches across all competitions.
Ifeanyi Emmanuel
Photo Credit : psv.nl
Copyright ANS