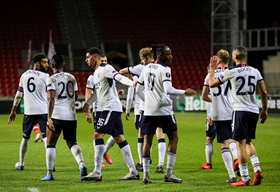 Glasgow Rangers' Nigeria international center back Leon Balogun has emerged as a doubt for Wednesday's Scottish Premiership match against Livingston at the Tony Macaroni Arena.
Balogun was substituted at half-time during Rangers' 5-2 thrashing of Royal Antwerp in the Europa League last Thursday and it was earlier thought that manager Steven Gerrard made the change because he was walking a disciplinary tightrope after picking up a booking in the 36th minute.
Gerrard has added that the former Brighton & Hove man was struggling with an injury before he was replaced.
Speaking to reporters at Tuesday's press conference, Gerrard stated : "In terms of Leon, Leon is struggling for tomorrow, he's got a niggle in the quad muscle that he came off the game with, so he's a big doubt for tomorrow for sure".
Balogun has made 16 appearances in the Scottish Premiership this season, helping the Light Blues keep twelve clean-sheets.
The 32-year-old has been used as a right-back in his last three matches for Rangers.
Ifeanyi Emmanuel
Photo Credit : rangers.co.uk
Copyright ANS