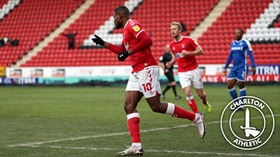 League One club Charlton Athletic have been successful in their appeal to have the red card shown to Anglo-Nigerian striker Chuks Aneke in their 3-0 loss to Blackpool last weekend overturned.
The Hale End Academy product was harshly sent off after being adjudged to have elbowed Dan Ballard as he jumped to win the ball in the 85th minute.
Aneke, who had received two red cards in his last three matches in the division, would have been suspended for four matches if his red card versus Blackpool was not rescinded.
"With replays showing the decision to be incorrect, the club lodged an appeal to have the decision overturned," Charlton said in a statement published on their official website.
"Following a review by the Football Association's independent Regulatory Commission, the claim for wrongful dismissal was successful and the red card has now been rescinded, making Aneke available for the trip to Wigan Athletic on Tuesday evening."
Aneke is Charlton Athletic's top scorer in the League One with 11 goals in 25 appearances.
Igho Kingsley
Photo Credit : cafc.co.uk
Copyright ANS