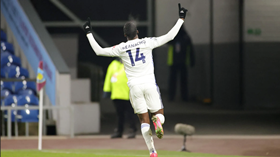 Newcastle United and England legend Alan Shearer has praised Leicester City's top scorer Jamie Vardy for the part he played in the build-up to the goal scored by Kelechi Iheanacho in the 1-1 draw against Burnley on Wednesday evening.
Eleven minutes before half-time, Iheanacho put the Foxes back on level terms with a fine finish, sending a superb first-time volley into the net after Ndidi lofted a ball over the Burnley defence.
Shearer pointed out that Vardy showed his awareness by creating space for his strike partner with his intelligent movement.
"It's really difficult, to watch the ball come over your shoulder, to time your run," Shearer said on Premier League Productions at half-time.

"But this is really intelligent play from both center forwards, fantastic ball over the top, that connection is unbelievable.

"But if you just watch the partnership between Iheanacho and Vardy, what Vardy does is that they are both there on the backline but watch Vardy here he just goes short there which that then creates the space for Iheanacho to run in behind.

"He's intelligent enough to understand that and it's about timing your run and then you are going to receive the pass and then that connection and finish is magnificent."
Iheanacho has scored six goals in all competitions this season, four less than he scored in his most productive season (2019-2020) as a Foxes player.
Ifeanyi Emmanuel
Photo Credit : lcfc.com
Copyright ANS