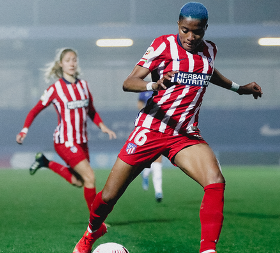 Super Falcons star Rasheedat Ajibade made her UEFA Women's Champions League debut as Atlético Madrid suffered a 2-0 defeat at the hands of Chelsea at Kingsmeadow (Kingston upon Thames, Surrey) on Wednesday night.
The 1999-born player had appeared in seven matches, including debuts in the Primera División Femenina and  Supercopa Femenina before Las Rojiblancas visited the English capital.
Wearing the number 16 jersey, she started on the right of a four-man midfield in a 4-4-2 formation.
Twelve minutes in, Chelsea defender Sophie Ingle was shown a red card for bringing down Ajibade in the box, only for Castellanos to subsequently miss the resultant penalty.
Despite the numerical disadvantage, Chelsea secured a win thanks to second half goals from Maren Mjelde and Fran Kirby.
With fifteen minutes remaining, Ajibade made way for Turid Knaak.
The second leg of the round of sixteen tie will hold at the U-Power Stadium (Monza) due to the Spanish government's extension of restrictions on inbound flights from the United Kingdom.
Ifeanyi Emmanuel
Photo Credit: atleticodemadrid.com
Copyright ANS