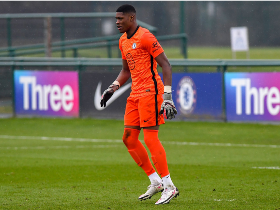 Former Nigeria U17 invitee Prince Adegoke has taken to social media to react after making his youth team debut for Chelsea on Wednesday afternoon.
Having recovered from a knee injury that required surgery, the promising goalkeeper was named in the starting lineup as Chelsea suffered a 3-2 defeat at the hands of Brighton & Hove in an U18 Premier League fixture at Cobham Training Center.
Brighton's Marcus Ifill cancelled out headed goals from Chelsea center backs Wiggett and Hughes in each half before Emmerson netted the game-winning goal five minutes from time.
A tall and big goalkeeper for his age, the 2003-born Adegoke started the season as a first-year scholar before his agreement with the Stamford Bridge outfit was upgraded to a professional contract last November.
"First Game in a Year🙏🏾Thankful to be on the pitch again☝🏾Not the result that we wanted but we move👍🏾," wrote Adegoke on Instagram.
Adegoke joined Chelsea at U13 level from non-league club Langley FC.
The likes of Arsenal, Bournemouth and Wolverhampton Wanderers were battling for his signature before he committed his future to Chelsea last summer.
Ifeanyi Emmanuel
Copyright ANS