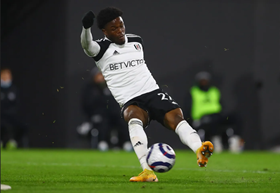 Fulham could have left Craven Cottage on Thursday evening with a share of the points but Josh Maja's 62nd minute goal in their 1-0 loss to Tottenham Hotspur was chalked off.
The Bordeaux loanee thought he had scored his third goal in the Premier League and celebrated with his Super Eagles teammate Ola Aina but after consulting the VAR, referee David Coote overturned the goal because Mario Lemina was deemed to have played the ball with his hand as he set up the Super Eagles striker.
Maja admitted post-match that it was a contentious decision by the match officials and acknowledged that there was nothing they could do to change the outcome.
The striker and his teammates have to quickly flush the result out of their system as they have another big clash coming up against defending champions Liverpool on Sunday, March 7.
Asked to give his take on the disallowed goal, Maja said to FFCtv : "Very contentious decision, obviously it didn't go our way but we have to live with it.

"Yes, we feel very hard done by it because there is nothing much you can do to change what happened.

"I think it's a rule that needs to be looked at and we have to move on quickly and get ready for Liverpool."
Fulham missed the chance to overtake Newcastle United, albeit on goal difference, and climb out of the relegation zone following their 12th loss of the season.
Ifeanyi Emmanuel
Photo Credit : fulhamfc.com
Copyright ANS