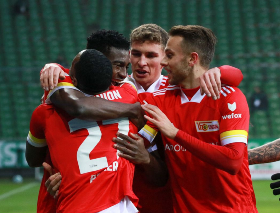 Taiwo Awoniyi is very unlikely to earn his first call-up to the Nigeria national team for this month's 2021 Africa Cup of Nations qualifying matches against the Republic of Benin and Lesotho.
Union Berlin manager Urs Fischer confirmed at the pre-match press conference before the trip to Arminia Bielefeld that the Liverpool loanee remains sidelined through injury.
"It's important to take steps forward. Awoniyi and Becker have both played a lot of games but they aren't available. We should talk about the guys who are there," Fischer told reporters on Friday.
"The guys are getting to the dynamic required. We can only work with what’s available."
Awoniyi was one of the three new strikers being considered for an invitation to the Super Eagles, the others being Terem Moffi and Sadiq Umar but everything indicates that coach Gernot Rohr will scratch out his name from the list of invitees.
Awoniyi's last game for Union Berlin was against Schalke 04 on February 13, before missing subsequent matches against SC Freiburg and Hoffenheim.
This season, the former Golden Eaglets and Flying Eagles striker has netted five goals in nineteen Bundesliga matches and has three assists to his name.
Ifeanyi Emmanuel
Photo Credit : fc-union-berlin.de
Copyright ANS