...the complete Nigerian football portal
Subscribe
Manchester United product Kehinde reveals what he must do to break into Super Eagles squad
Published: March 06, 2021 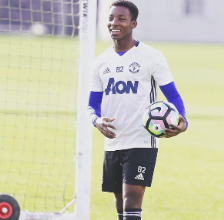 Manchester United academy product Tosin Kehinde still harbors the ambition of playing international football for Nigeria though he is eligible to represent England where he spent most of his childhood.
The winger cum attacking midfielder announced his intention to play for Nigeria in 2018 and a year later he was officially invited to the Olympic squad for an U23 AFCON qualifier versus Libya but wasn't handed game time against the North Africans.
The 2020-2021 campaign has been a season of overwhelming positives for Kehinde, with the 22-year-old cementing his place in the starting XI and handed the iconic number 10 jersey at Randers.
On top of that, his goal involvement stands at five (1 goal, 4 assists) in fifteen appearances in the Danish Superliga.
Allnigeriasoccer.com exclusively reported back in December that Queens Park Rangers director of football, Les Ferdinand is a big admirer of Kehinde and has been monitoring him remotely with a view to a possible swoop.
Kehinde is aware that he has to join a bigger team in a top European League before he is considered for a Super Eagles call-up.
On his ambition to play for the Super Eagles, Kehinde told Manchester Evening News : "I do. I know it's something I'd like to do. I also know that I need to probably play at a bigger team to get that opportunity, I know it's something I'm definitely capable of and I do hope to achieve.
"You always want to see how far you can go and that's not always necessarily in your hands. Every summer and every winter is a time where you see what's on the table and you make a decision what's best for you.
"I'm happy here, so it all depends on what the summer brings."
Kehinde ended a seven-year association with Manchester United in 2018, before joining Feirense, from where he moved to Randers on a permanent deal last summer.
Igho Kingsley
Copyright ANS