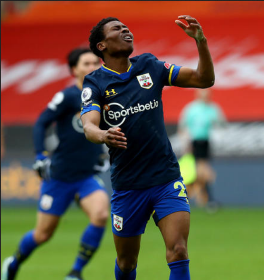 Southampton ended a nine-match winless run in the English Premier League by beating Sheffield United 2-0 at Bramall Lane on Saturday evening.
Making his second top-flight start, Nigeria Football Federation target Nathan Tella was very impressive in the first part of the game.
James Ward-Prowse's goal from the penalty spot was the difference between the two sides at half-time, after Chelsea loanee Ethan Ampadu brought down Tella in the box in the 32nd minute.
Tella caused Sheffield United so many problems in the first half with his pace; Jayden Bogle and Ampadu were both booked for fouling the former Arsenal schoolboy.
Retired England midfielder Owen Hargreaves, winner of the Premier League with Manchester United in 2007-2008, was impressed with the display of Tella, and hailed him as the best player on the pitch.
Speaking at half-time, Hargreaves said on Premier League Productions : "He (Tella) has been on the move the whole game, trying to get in behind, making smart runs. That one there, maybe just shows a little bit of inexperience, probably lobbed that over the top.

"Then you see him again, he fancies himself with his pace, pushes it beyond the defenders.

"He's technically good in these areas and tight areas, keeping the ball and I think he's been the best player on the pitch."
Che Adams's 49th minute strike sealed the three points for the Saints, before Tella was replaced with fourteen minutes left on the clock.
Ifeanyi Emmanuel
Photo Credit : southamptonfc.com
Copyright ANS