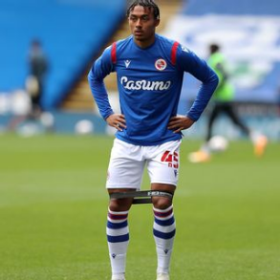 Femi Azeez, elder brother of talented Arsenal midfielder Miguel, made his senior debut for Championship club Reading on Saturday evening.
A midfielder by trade, Femi became the latest Royals academy graduate to play for the first team when he came off the bench in the 90th minute as Reading thrashed Sheffield Wednesday 3-0 at the Madejski Stadium, wearing the number 45 on the back of his shirt.
The 19-year-old was in the Reading sides that recorded 1-0 wins over Watford and Blackburn Rovers earlier in the season but was an unused substitute on both occasions.
Reading recruited Azeez from non-league club Wealdstone FC in September 2019, initially signing him on a one-year deal, before the deal was extended until the end of the 2020-2021 season.
He was sidelined through injury from October to January, but he is now back to full fitness and has caught the eye since his return with three goals in his last five games in the Premier League 2.
Michael Olise's first half penalty and second half strikes from Lucas Joao and Andy Yiadom sealed a comprehensive win for Reading.
Out-of-favour Nigeria national teamer Sone Aluko played the last 23 minutes for Reading and was involved in the build-up to their third goal in the 88th minute.
Ifeanyi Emmanuel
Photo Credit : readingfc.co.uk
Copyright ANS