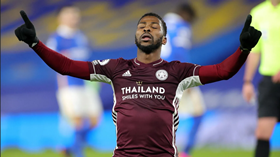 Leicester City came from behind to register a 2-1 win against Brighton & Hove in an English Premier League clash at The American Express Community Stadium on Saturday night.
For the third game running, manager Brendan Rodgers handed starts to Nigeria internationals Kelechi Iheanacho and Wilfred Ndidi, and the striker justified his inclusion in the starting XI with another crucial goal for the Foxes.
Brighton & Hove dominated the first half and were deservedly in front through Adam Lallana.
Iheanacho equalised just past the hour mark, taking a couple of touches before lobbing the ball over the Seagulls goalkeeper Robert Sanchez.
Leicester City got their winning goal from an unlikely source as Daniel Amartey headed home from a corner in the 87th minute, his second ever goal in a Foxes shirt, after a howler from the Brighton goalkeeper.
Speaking during commentary on the Premier League world feed, 1994 Africa Cup of Nations winner and former Norwich City striker Efan Ekoku admitted that he was impressed by the display of Iheanacho as the Super Eagle made way for Hamza Choudhury in the 90th minute.
Ekoku said : "He (Iheanacho) has been their best player throughout the game, Youri Tielemans I think has done well in the second half but pound for pound the Nigerian has been their star man".
Iheanacho has scored three goals in the Premier League this season, with all the goals netted in away matches.
Ifeanyi Emmanuel
Photo Credit : lcfc.com
Copyright ANS