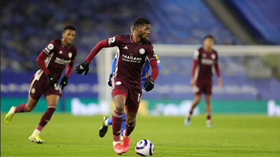 Brendan Rodgers' Leicester City are now unbeaten in thirteen away matches in all competitions after coming from behind to defeat Brighton & Hove 2-1 at The American Express Community Stadium (Falmer, East Sussex) on Saturday night.
The Foxes were one down at half-time; former Liverpool man Adam Lallana calmly slotted into the bottom left corner from 12 yards to give the Seagulls the lead in the tenth minute.
Leicester City came out in the second half and put up a top performance to secure a win.
In the 53rd minute, Iheanacho thought he beat goalkeeper Sanchez at the near post with a fierce effort, but the ball ended up in the side-netting.
The Leicester City number 14 scored the equaliser nine minutes later, taking a couple of touches before lobbing the ball over the Seagulls goalkeeper.
Former Barcelona striker and Match of the Day presenter Gary Lineker immediately took to social media to praise the Nigeria international for his second goal in as many games.
Lineker posted on Twitter : "Yes @67Kelechi. He’s done it again. Delightful finish. 👏🏻".
It was a significant result in the race for the Champions League positions as Leicester City have climbed to second in the table before today's Manchester derby at the Etihad Stadium.
Ifeanyi Emmanuel
Photo Credit : lcfc.com
Copyright ANS