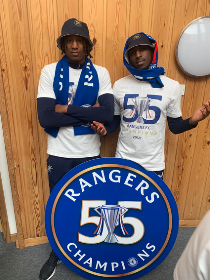 Glasgow Rangers have been crowned champions of the Scottish Premiership for the 2020-2021 season, denying bitter rivals Celtic their tenth consecutive title.
The Light Blues were handed the title after beating St. Mirren 3-0 on Saturday and their nearest challengers Celtic drawing 0-0 at Dundee United this afternoon.
Nigeria internationals Leon Balogun and Joe Aribo were key members of the Rangers squad that won the club their 55th title in the Scottish top-flight,with the defender playing 17 matches so far and the central midfielder making 24 appearances.
Former Charlton Athletic man Aribo admitted that he chose to join Rangers as it was his dream to win titles with the club, despite having options to go elsewhere.
Speaking to Rangers TV, Aribo said : "It is an amazing feeling, honestly the boys are buzzing, still doesn't actually feel real like it just feels crazy right now and I'm just excited that we are able to do it.
"My aim was to come here and win trophies, win titles and that's what we have done so obviously I've achieved what I wanted to achieve but there's obviously more to come."
Balogun is delighted to win the first league title of his professional career and is looking forward to properly introduce himself to the fans.
"Its incredible, we've had absolute scenes already before, celebrating yesterday was kind of a buzz already but then today to get over the line, it would take me 100 percent to fully understand it.

"It's my first league win in my career, to win it with this club at that time is so big, it would take me some time to probably understand it and also some fans back or some fans around me to really see and grasp how big it is.

"Yesterday the welcome we've had was incredible and the scenes after the match obviously as well but still the boys told me I haven't seen nothing yet so I'm really just looking forward, but it gives you as you just mentioned, like social media, moments like yesterday give you a little hint on what's to come and I can't wait to finally introduce myself to all of them properly just like all the other new players," said Balogun.
Prior to this campaign, Rangers last won the league title in 2010-2011 under legendary manager Walter Smith.
Ifeanyi Emmanuel
Copyright ANS