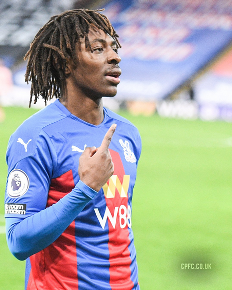 Jose Mourinho's Tottenham Hotspur are right back in the top four hunt after thrashing Crystal Palace 4-1 at the Tottenham Hotspur Stadium on Sunday night, their third consecutive win in the Premier League.
The night belonged to Harry Kane and Gareth Bale with the England striker and Wales star netting two goals apiece.
Spurs were very impressive in the second half after Crystal Palace striker Christian Benteke had given them a wake-up call just before the break when the Belgian was able to claim an equalising goal.
Eagles boss Roy Hodgson made a strange change at halftime, bringing on fit-again winger Wilfred Zaha as a replacement for England youth international of Nigerian descent Eberechi Eze.
Former Crystal Palace striker Clinton Morrison was baffled by the decision of Hodgson to replace Eze, saying he wanted the two players to be on the pitch at the same time.
"I'm not happy with that substitution because you would really want to see Wilfried Zaha and Eberechi Eze on the pitch together. I would've sacrificed another player and left Eze on the pitch," Morrison said on BBC Radio 5 Live.

"But Roy Hodgson knows what he's doing, he's the manager."
Tottenham Hotspur's win takes them above the champions Liverpool and level on points with West Ham, and now just two behind Chelsea in terms of the race for the Champions League positions.
Ifeanyi Emmanuel
Photo Credit : cpfc.co.uk
Copyright ANS