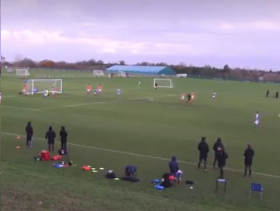 Allnigeriasoccer.com has been told that Championship club Birmingham City are set to confirm the signing of Nigeria-eligible youngster Ifeoluwa Oni.
Oni has ended his association with The Addicks by agreeing a scholarship deal with the Blues ahead of the 2021-2022 campaign.
He was a member of the Charlton Athletic squad that reached the final of the prestigious SuperCupNI (Junior section) in the summer of 2019 before losing to Glasgow Rangers.
A central midfielder by trade, Oni has been likened to Chelsea star N'Golo Kante but everything indicates that he is a more complete and versatile midfielder.
He is aerially good despite his height, very good on the ball, technically good and is also comfortable being deployed as a box-to-box midfielder.
Oni will be hoping to follow in the footsteps of former Super Eagles invitee Viv Solomon-Otabor who rose through Birmingham City's academy ranks before making the step up to the first team.
Birmingham City are topping the U18 Professional Development League table with 38 points from 17 matches.
Ifeanyi Emmanuel
Copyright ANS