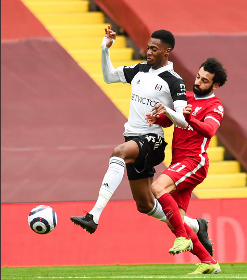 Fulham can move out of the bottom three temporarily if they manage to get at least one point from their ongoing game against the champions-in-waiting Manchester City on Saturday night.
Manager Scott Parker has picked Nigeria-eligible trio Tosin Adarabioyo, Ola Aina and Ademola Lookman in his starting lineup, while Bordeaux loanee Josh Maja drops to the bench, having started the previous six league games.
City strikers Sergio Aguero and Gabriel Jesus are coming up against former Manchester City youth team captain in Tosin.

The central defender has been pivotal for Fulham as they aim to beat the drop, helping them keep six clean sheets in his last ten matches.
Speaking just before the game started at Craven Cottage, Pep Guardiola had nothing but praise for Tosin, saying he was delighted with the progress made by his former pupil since he joined the Cottagers.
Asked what he saw of Tosin whilst he was at City, Guardiola told Sky Sports : "First of all, I would like to say how happy we are all of us for what he's doing.
"He's a guy for the academy, finally, he took his position in the Premier League and we are more than delighted the level he's showing.
"He deserves it, he's an exceptional person and a good footballer."
Tosin made eight appearances in all competitions for Manchester City under Guardiola but didn't get the chance to feature in the Premier League.
Ifeanyi Emmanuel
Photo Credit : fulhamfc.com
Copyright ANS