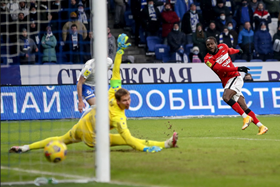 Spartak Moscow are sweating over the fitness of former Nigeria international Victor Moses before their next Russian Premier League encounter against Ural.
The Chelsea loanee was forced off during the first half of their 2-1 win at Dinamo Moscow and that was after he netted an excellent goal to equalise for The Red-Whites.
Spartak Moscow coach Andreas Hinkel has revealed that Moses will undergo tests in the coming days to determine the exact extent of his injury.
About the injuries suffered by Moses and Larsson that saw them replaced in the 40th and 90th minute respectively, Hinkel told the club's official website : "I haven't spoken to Jordan after the game until I saw him.
"And Moses said that there was a blow to the knee and the feeling that he tucked it.
"At the same time, he thinks that nothing happened, but we will conduct the necessary medical examination."
Moses is one of the first names on the Spartak Moscow team sheet, having started the last eleven matches played by the club in the Premier League.
Ifeanyi Emmanuel
Photo Credit : spartak.com
Copyright ANS