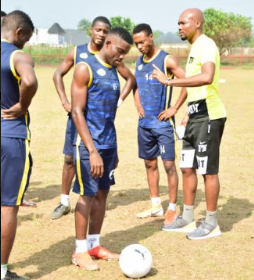 Former Right2Win and Dream Stars Ladies Coach, Felix Ifeanyi Nwosu says he is not contracted to any club at the moment, adding that he's available to take up any coaching job for now.

The former Rangers defender who was in charge of Heegan FC in the Somalian top-flight league, where he left due to security challenges in Somalia after guiding the team to the semifinals of the National FA Cup said news of him reaching an agreement with a club in the Nigeria National League is not true.

Though he confirmed that he joined the technical crew of Delta Force as an assistant coach prior to the commencement of the Nigeria National League season, but the two parties parted ways mutually in February 2021 before the season commenced.

Coach Felix Nwosu said "There was a time I read that Vandrezzer were interested in me, that was immediately after Rafael Everton left, but I was not contacted so I assumed it was more of a speculation, the nature of football allows that though but I'm saying categorically that Delta Force was my last coaching job and I'm presently free to work with any team.

"Since I returned from Somali, I have taken charge of some teams in Nigeria and honestly, I can't wait to get going again.

"I was at Delta Force briefly, but at the moment, I no longer work with them."

Felix Ifeanyi Nwosu however confirmed that there are offers on the table but he won't turn down potential suitors as long as he has not put pen to paper elsewhere.