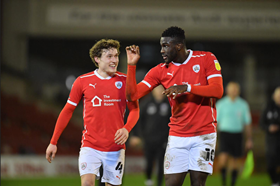 According to Eurosport, Premier League side Everton are interested in signing Nigeria-eligible striker Daryl Dike in the summer transfer window.
It is claimed that the Toffees talent spotters have been impressed with the performances of the United States international since he joined Barnsley on loan from Orlando City in the winter transfer market.
In eleven Championship outings for the Reds, he has scored five goals and the promotion hopefuls have lost just one of those matches, winning nine and drawing one.
The American-Nigerian striker could be an understudy to Everton's England star Dominic Calvert-Lewin if the deal goes through.
He earned his second cap for the United States in a 2-1 win over Northern Ireland on Sunday, coming off the bench to replace Jordan Siebatcheu with 27 minutes left on the clock.
Barnsley have an option to buy Dike permanently in the summer while Orlando City inserted a conditional right of recall into the loan deal.
Earlier this week, the 20-year-old picked up a trio of awards, including Barnsley's Player of the Month and Goal of the Month, and was voted Football League World Fans' Player of the Month for March.