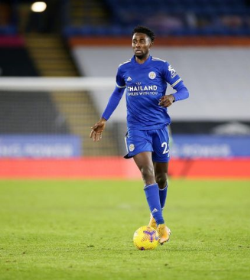 Leicester City boss Brendan Rodgers has admitted that his players were not as sharp as they were against Manchester United, their last game before the international break.
The Foxes were beaten 2-0 by Manchester City on Saturday evening, with Benjamin Mendy and Gabriel Jesus on target in the second half.
The Northern Irish manager believes the Foxes were not at the same level compared to their last outing as several of the players were in action during the international break and rejoined the club late.
Rodgers revealed that Super Eagles duo Wilfred Ndidi and Kelechi Iheanacho returned to the United Kingdom on Thursday night, meaning they only got together with the squad on Friday, a day before the meeting with Manchester City.
Speaking at the post-match press conference, Rodgers said : "We'll have a good week next week, we'll have all the players back from international duty.

"You know the likes of Wilfred Ndidi and Kelechi, they are back late Thursday night from Nigeria and lots of travel, a lot of the international players playing a lot of games, and we probably weren't as sharp as what we've been in our last game here against Manchester United".
Iheanacho and Ndidi were substituted in the 72nd and 83rd minute respectively in the loss to Manchester City, the midfielder was walking a disciplinary tightrope after he was cautioned in the 32nd minute.
Ifeanyi Emmanuel
Photo Credit : lcfc.com