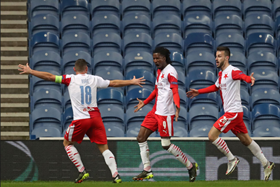 Peter Olayinka helped Slavia Prague set a new Czech First League record following the goalless draw with FC Zbrojovka Brno at Mestsky fotbalovy stadion Srbská on Easter Sunday.
Slavia Prague are now thirty seven games unbeaten, surpassing their own record from 2017.
The red and whites have not tasted defeat in the league since losing to Slovácko on March 1, 2020, and of the 37 games they were involved in, they won 28 and only nine were draws.
Including today's draw at FC Zbrojovka Brno, Olayinka played 22 league games in total during the unbeaten run.
The number nine and his Slavia Prague teammates will take their impressive unbeaten run in the league to the Emirates Stadium, where they face Arsenal in the quarterfinals of the Europa League on Thursday, April 8.
Though the Gunners are billed as favorites, Slavia Prague have already seen off two British teams in Leicester City and Glasgow Rangers in the knockout rounds of this season's Europa League.
Olayinka has five goal contributions (3 goals and 2 assists) in the 2020-2021 Europa League.
Igho Kingsley
Photo Credit : slavia.cz