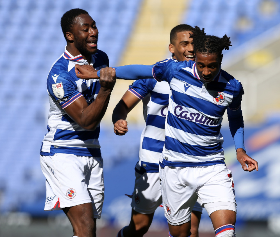 Super Eagles target Michael Olise scored a sublime goal to help Reading secure a 3-1 win over Derby County in a Championship clash at the Madejski Stadium on Monday afternoon.
The France youth international gave the Royals the lead on the stroke of half-time when he picked out the top corner from around 25 yards out.
Olise has compliments from Reading fans and manager Veljko Paunovic for his brilliant strike - his sixth of the season.
Considered one of the most talented teenagers in the Championship, the multi-eligible playmaker is being tipped to make a move to the Premier League in the summer.
Speaking at the post-match press conference, Paunovic stated : "It was a fantastic goal in the right moment of the game. Earlier in the season, we didn't have these openings but it was a very good response."
Olise celebrated his goal by appearing to scribble something into his palm as if he were signing off a contract.
"We have to understand one thing - he is a young lad who likes to be special. He does these kinds of things because he wants to call attention.

"Of course, we will give him that attention that he needs but whatever he meant with that, I don't want to bite or discuss it," added Paunovic.
Olise, who has ten assists to his name in the Championship, was named on the Super Eagles standby list for last month's 2021 Africa Cup of Nations qualifying matches against the Republic of Benin and Lesotho.
Igho Kingsley
Photo Credit : readingfc.co.uk
Copyright ANS