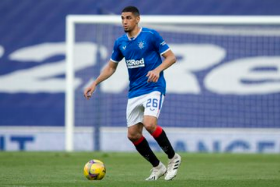 Leon Balogun has explained how he joined Scottish Premiership champions Glasgow Rangers last summer.
The Light Blues announced the capture of the central defender on a free transfer shortly after he ended his association with English Premier League side Brighton & Hove.
Balogun was an integral part of the Rangers side under the tutelage of Steven Gerrard that won the league for the first time in ten years, and has made nineteen appearances to date while providing three assists.
The former Hanover, Bremen, Düsseldorf and Mainz star admitted that he decided to join Rangers after positive talks with Gerrard.
"When my agent called me a year ago, he immediately said: 'I have one thing here that is huge for you: the Rangers'," Balogun said to Bild.
"At first I thought: Scottish League, well. But then I felt Steven Gerrard's interest. I don't mean to say that he chased me. But he really went out of his way to help me.

"I felt that he wanted me as a player, as a guy, as Leon Balogun. He said I was a perfect match for his game idea and the identity of the club. With every word he convinced me even more".
Balogun's contract with Rangers runs out at the end of the 2020-2021 campaign but the Scottish Premiership giants intend to trigger their option to keep the Super Eagles star at Ibrox Stadium for an extra year.
Ifeanyi Emmanuel
Photo Credit : rangers.co.uk
Copyright ANS