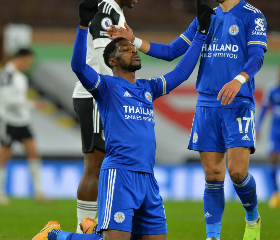 Legendary Arsenal striker Ian Wright has credited Leicester City manager Brendan Rodgers and Jamie Vardy for Kelechi Iheanacho's goalscoring form in recent weeks.
Though there is a recurring debate over Iheanacho's best position, he has proved that he can play alongside Jamie Vardy in attack, netting seven goals in his last five matches across all competitions.
Wright pointed out that the Nigeria international has thrived because Vardy is creating spaces for him and he's guaranteed game time.
"Yes he (Brendan Rodgers) does improve players, we saw that unbelievable interview with James Maddison, singing his praises about the work he does with him," Wright said on Premier League Productions.

"It's obvious that Iheanacho is getting the same kind of tuition from him and when you look at where he plays it does work for him.

"When you look at some of those goals and the movement Jamie Vardy does to create space for him to then get opportunities to take the chances like he's taking now, and he's in the team that he will play.

"He might start then he will get taken off or he might come on for ten minutes, now he knows he will play."
Iheanacho, who recently extended his contract with the Foxes until 2024, was named Premier League Player of the Month for March 2021.
Ifeanyi Emmanuel
Photo Credit : lcfc.com
Copyright ANS