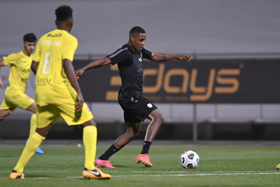 Former Manchester United striker Odion Ighalo bagged a brace to help his Saudi Arabian club Al Shabab record a comprehensive 7-2 win against Twaeq in a friendly on Easter Monday.
The 2019 Africa Cup of Nations top scorer has received clearance to resume full training with Al Shabab after suffering an injury in the first half of the defeat to Al-Ittihad Jeddah on March 10.
Ighalo was not available for selection in the next league game against Al-Taawoun FC, which they also lost.
He came through yesterday's friendly unscathed, meaning he is in contention to be involved in some capacity against Al Batin on April 10, barring a relapse in training.
Prior to his spell on the sidelines, the former Udinese, Watford and Granada man endeared himself to the Al Shabab fans by scoring three goals and providing an assist in seven appearances in the Saudi Professional League.
Al Shabab are second in the table with 45 points, three less than table-toppers Al Hilal, with six matches remaining in the league.
Ifeanyi Emmanuel
Copyright ANS