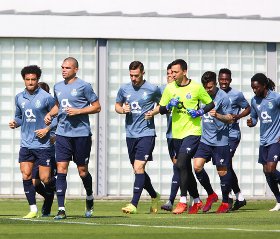 Pacy Super Eagles defender Zaidu Sanusi is seemingly in contention to be named in Porto's macthday squad when they take on Premier League side Chelsea in the quarterfinals of the UEFA Champions League on Wednesday evening.
Sanusi watched proceedings from the bench as Porto beat his former team CD Santa Clara at the weekend, following his return to Portugal after international commitments with the Super Eagles.
The left-back was pictured training with the Porto team in their last workout on Portuguese soil at CTFD PortoGaia before their meeting with Chelsea.
Tomorrow's game will hold at the  Estadio Ramón Sánchez-Pizjuán - Seville, and the Portuguese champions will travel to Spain at 1710 hours with arrival scheduled for 1810 hours.
In his first season at Porto, Sanusi has emerged as a key player for the Dragons in the Champions League, starting all their eight matches in the competition, scoring one goal.
Meanwhile, England youth international of Nigerian descent, Faustino Anjorin will not add to his solitary Champions League appearance in the game against Porto.
Chelsea manager Thomas Tuchel has named a 23-man traveling party to Spain and the attacking midfielder is not part of the group.
Ifeanyi Emmanuel
Photo Credit : fcporto.pt
Copyright ANS