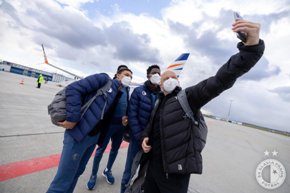 Slavia Prague striker Peter Olayinka is in contention to face Arsenal in the quarterfinals of the UEFA Europa League at the Emirates Stadium on Thursday evening.
The Nigeria international was among the players pictured departing for London on Tuesday afternoon.
To get to the last eight, Czech champions Slavia saw off two British teams in Leicester City and Glasgow Rangers, with Olayinka starting all the four matches.
The number nine bagged an assist in the round of 32 second leg against the Foxes, provided an assist in the round of 16 first leg against Rangers, before scoring the crucial opening goal in the second leg.
Olayinka's other goal involvements in this season's Europa League came against Bayer Leverkusen and OGC Nice in the group stage.
Slavia Prague are on a 37-game unbeaten streak in the Czech Fortuna Liga and their Nigerian striker netted six goals during the run.
Ifeanyi Emmanuel
Photo Credit : slavia.cz
Copyright ANS