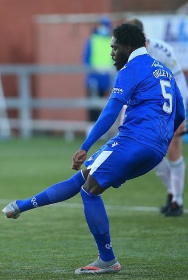 Allnigeriasoccer.com understands that Chelsea academy product Ayo Obileye is tipped to make a move to the Scottish Premiership when the transfer window reopens for business in the summer.
The former Nigeria U23 invitee has put himself in the shop window after scoring nine goals in twenty-two matches for Queen of the South in the Scottish Championship, leading to clubs scrambling to secure the services of the versatile center back.
Apart from Livingston, other Scottish Premiership and Championship clubs have made contact with the player's camp, and he's also on the radar of European teams.
However, it is understood that he is most likely to stay in Scotland and go for the Premiership.
Sheffield Wednesday, Charlton Athletic, Dagenham & Redbridge, Eastleigh, Dover Athletic, Maidenhead United and Ebbsfleet United are the clubs he previously turned out for before switching to Queen of the South in September 2020.
Obileye has a contract with Queen of the South until the end of the 2020-2021 season.
Ifeanyi Emmanuel
Copyright ANS