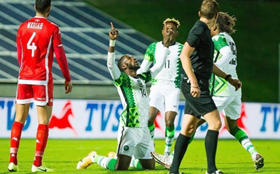 Over the last few days, the most significant Leagues worldwide have been put on hold temporarily to allow star players to fulfill their respective National teams' duties.
Every player's dream is to get called up by their National team coach and participate in tournaments such as the Euros, Copa America, AFCON, and the World Cup.
Before a team takes part in such massive tournaments, there have to be qualification stages first.
Many African players plying their trade in the Premier League, La Liga, Bundesliga, Serie A, Ligue 1, and many more leagues had to jet into their respective countries and help their teams qualify for AFCON.
Among the notable players taking part, especially those who ply their trade in the Premier League, are Mohammed Salah (Egypt), Hakim Ziyech (Morocco), Ndidi (Nigeria), and Kelechi Iheanacho.
All the mentioned players have played a massive role in helping their respective Countries advance past the group stages. Fortunately, soccer betting enthusiasts can wager on the action through the Betway app.
As Nigeria commenced its preparation for the clash with Benin, Iheanacho was the only key figure missing.
The former Manchester City forward currently playing for Leicester is in top form, despite missing the preparation.
Before the International break, Iheanacho scored two goals to help Leicester City eliminate Man Utd in the FA Cup Quarter Finals.
Iheanacho is still among the few African footballers worth wagering on through the Betway sports bookie.
During the first training session, Iheanacho was absent, yet he was on the list of players called up by their senior coach, Gernot Rohr.
The training took place in Lagos before facing Benin on 28th March 2021.
On the first day, his absence from the training grounds caused a stir online as fans started speculating on what could have happened to their star striker.
However, he later linked-up with his team-mates and got selected in the first eleven when facing Benin.
Despite not being on the score-sheet, it was a relief to see one of their brightest stars help the team beat Benin and top Group  L with one match [against Lesotho] to spare.
Nigeria beat Benin 0-1, booking their ticket into the AFCON, which is expected to occur in Cameroon in 2022.
In the first leg played at Godswill Akpabio Stadium, Nigeria easily cruised to victory after thrashing Michel Dussuyers team [Benin] 2-1.
After winning the second leg, Nigeria now sits comfortably at the top of their group, meaning they will be part of the teams that will battle it out with others for the prestigious trophy.
Nigeria National Team, widely known as the Super-Eagles, has been crowned AFCON winners on three occasions.
They will be looking forward to the tournament, believing that they will win the trophy due to the current breed of players' talent at their disposal.
Earlier on, their head coach said that he intends to use the qualification to motivate his players ahead of the World Cup Qualification tournament that will take place soon.
Once the coach gets his team selection and tactics right, players such as Iheanacho will help them get to the upcoming tournaments' advanced stages.
Fans are genuinely behind their star man, and that must have been the reason his absence in training raised eyebrows.