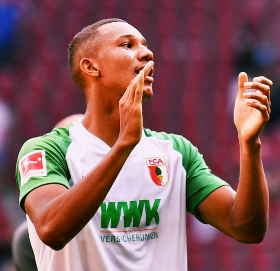 According to German newspaper Bild, Nigeria Football Federation target Felix Uduokhai is one of two players being considered by Borussia Dortmund as they look to recruit a new central defender in the summer transfer window.
Dortmund are planning to part company with three defenders at the end of the season, Lukasz Piszczek, Marcel Schmelzer and Nico Schulz, which would create space in the wage bill for the signing of a new center back.
Uduokhai fits perfectly with the style of play of incoming Borussia Dortmund manager Marco Rose due to his strengths in opening the game, tacking and speed.
The report added that Augsburg would be willing to part company with Uduokhai if Dortmund meet his asking price of 15 million euros.
The 23-year-old joined Augsburg initially on loan for the 2019-2020 season before the deal was made permanent this season and is contracted to the club until June 2024.
He played 26 games in his first season with the club and has racked up 28 appearances this term, scoring one goal.
Uduokhai was called up to Germany's senior squad for their matches against Czech Republic, Ukraine and Spain in November 2020 but was an unused substitute in the three games.
Igho Kingsley
Photo Credit : fcaugsburg.com
Copyright ANS