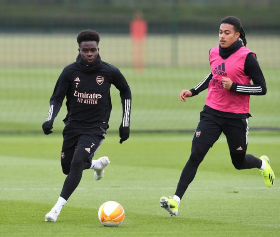 Spanish-Anglo-Nigerian midfielder Miguel Azeez was promoted to Arsenal's first team training by manager Mikel Arteta ahead of Thursday's Europa League clash against Slavia Prague.
The official website of the Gunners has published images of Wednesday afternoon's training session at London Colney - their final workout before facing the Czech champions - and it is confirmed that Azeez was part of the group.
The England youth international was pictured battling for the ball with experienced African internationals Pierre-Emerick Aubameyang and Mohamed Elneny, and Three Lions rising star Bulayo Saka.
A midfielder by trade, Azeez could be considered for the matchday squad, with Real Madrid loanee Martin Odegaard rated as doubtful after suffering an ankle injury whilst on international duty last month.
One of the brightest products at the Gunners, he made his professional debut in the Europa League, coming off the bench for the last seven minutes against Dundalk in December and was an unused substitute against Molde (a) and Rapid Vienna (h) also in the group stage.
Azeez scored in his last game for an Arsenal team, against Blackburn Rovers in the FA Youth Cup on March 20.
Ifeanyi Emmanuel
Photo Credit : arsenal.com
Copyright ANS