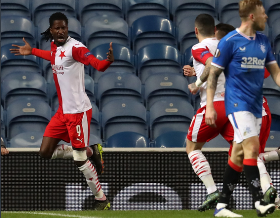 Peter Olayinka has admitted that Slavia Prague have to be wary of two Arsenal strikers in Pierre-Emerick Aubameyang and Alexandre Lacazette when the two teams face off in Thursday's Europa League quarterfinal clash at the Emirates Stadium in London.
Slavia Prague are set to play their fifth consecutive game against a British opponent in the Europa League, after seeing off Leicester City and Glasgow Rangers in the round of 32 and 16 respectively.
Olayinka has picked out Aubameyang and Lacazette, who have scored 27 goals between them in all competitions this season, as Arsenal's key players but noted that the London club do not rely much on individuality.
"They play a lot in a team, everyone is important to them. But I think that Aubameyang and Lacazette are the top players we have to be most careful about," Olayinka said to the official website of Slavia Prague.
The Nigeria international is eagerly looking forward to playing his first competitive match at the Emirates Stadium.
"I am focused on the match and I am looking forward to it. It's great to be in such a stadium.
"We did well in the last outdoor matches and I believe that we can show an equally good performance on Thursday," Olayinka added.
Olayinka has been in fine form in this season's Europa League, scoring three goals and setting up two others in nine games.
Ifeanyi Emmanuel
Photo Credit : slavia.cz
Copyright ANS