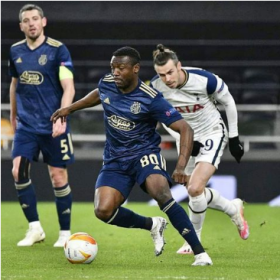 Sergej Jakirović, who coached Iyayi Atiemwen at Gorica, has highlighted what the ex-Nigeria U23 international will bring to the Dinamo Zagreb side if he is fielded in Thursday's Europa League quarterfinal clash against Villarreal.
Atiemwen is heavily tipped to be involved in some capacity when the Croatian giants face off with the Spanish side at the Stadion Maksimir (Zagreb), and Jakirović has suggested his former pupil could be an unlikely hero for the home team.
Though the Nigerian has yet to start a game in European competitions this season, he has shown his quality off the bench with a goal involvement of three in his last six games.
"Atiemwen can definitely be 'the one'.  He is certainly not a player like Petković, a targetman, but he is a player who has already played the position of a striker and can do a lot with the balls in space.," Jakirović told Sportske Novosti.
"Finally, in that game against Benfica, he missed the goal, but broke through the three, showing that he can and knows it.
"If you ask me, even if I were the coach of Dinamo, I would still leave Oršić in the best wing position where he showed how deadly he is, and in case Petko can't, I would entrust that role to Bela.
"I say, I’ve watched him in training sessions and games and I know what he’s capable of. He is still not even close to his limits in Dinamo."
Jose Mourinho's Tottenham Hotspur were dumped out of the Europa League by Dinamo Zagrab in the last sixteen, with Atiemwen setting up the crucial second goal eight minutes from time.
Igho Kingsley
Photo Credit : instagram.com/atiemwen1
Copyright ANS