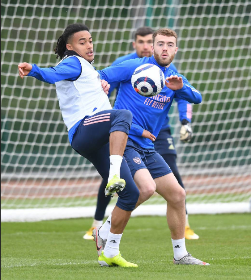 Spanish-Anglo-Nigerian midfielder Miguel Azeez was involved in Arsenal's last training session before their trip to South Yorkshire, where they face relegation candidates Sheffield United in the Premier League.
The official website of Arsenal has published the latest training images and the England youth international was pictured contesting for the ball with Calum Chambers in the workout held at London Colney.
Azeez has been part of the first team bubble this week as he also trained with the squad on Friday, a day after he was named in the matchday squad for the Europa League quarterfinal clash against Slavia Prague.
The 18-year-old predominantly plays for Arsenal U23s but they are not in action until Monday, April 12 - a Premier League 2 clash at Derby County .
He has yet to be included in a matchday squad for a Premier League game and his only appearance to date for the first team was when he came on as a substitute for Joe Willock against Dundalk in the Europa League four months ago.
A product of the Hale End Academy, Azeez has been on the books of Arsenal since the age of five.
Ifeanyi Emmanuel
Photo Credit : arsenal.com
Copyright ANS