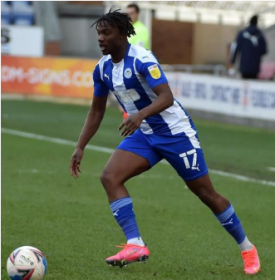 Four Nigeria-eligible strikers were on target for their respective clubs in the English Football League on Saturday, April 10.
We begin at Oakwell, where Barnsley battled Middlesbrough. It finished 2-0 in favour of the home team - a victory that sees the Reds consolidate their fifth position in the table.
With fifteen minutes left, Daryl Dike doubled Barnsley's advantage with a diving header, taking his tally to eight goals in the Championship since his move in the winter transfer market.
Still in the Championship, Bournemouth registered a comprehensive 4-1 win over Coventry City at the Vitality Stadium.
Former Chelsea and Liverpool striker Dominic Solanke wrapped up the scoring in the second minute of added time when a goalbound effort cannoned off him into the corner.
The 2017 U20 World Cup winner has contributed to 22 goals (13 goals, 9 assists) in 35 league matches this campaign.
Elsewhere, Luton Town came from behind to register a 3-1 win against Wycombe Wanderers at Adams Park.
Two minutes from time, Fulham academy product Elijah Adebayo scored Luton Town's third goal, heading home brilliantly from Cornick's cross.
Finally, former Super Eagles invitee Viv Solomon-Otabor netted Wigan Athletic's third goal in their impressive 4-1 road win at Doncaster Rovers.
At minute 33, Solomon-Otabor easily slotted home after the ball was laid on a plate for him by Joseph Dodoo.
Ifeanyi Emmanuel
Copyright ANS