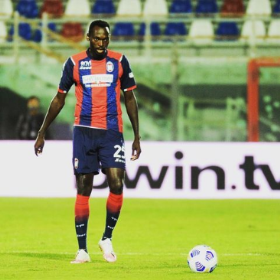 Super Eagles striker Simeon Tochukwu Nwankwo was on target but could not prevent relegation candidates Crotone from losing 3-2 to Spezia in a Seria A match staged at the Stadio Alberto Picco (La Spezia) on Saturday.
In doing so, Simy took his tally for the season to 16 goals from 30 appearances in the Italian top-flight.
According to the statisticians at OPTA, only Yakubu with Blackburn Rovers in 2011/12 (17 goals) has scored more goals than Simy in Serie A this season (16) among Nigerian players in a single top-5 European League campaign in 2000s.
Scoring two goals in Crotone's last eight matches of the season would mean Simy surpassing the record set by Yakubu nine years ago.
The 28-year-old has scored in each of his last six matches in the Serie A and found the net on nine occasions during the run.
Against Spezia, Simy slotted home from close range after the ball was laid on a plate for him by Niccolò Zanellato twelve minutes from time.
Only Juventus' Cristiano Ronaldo (25), Inter Milan's Romelu Lukaku (21) and Atalanta's Luis Muriel (18) have scored more goals than Simy in the Serie A in 2020-2021.
Ifeanyi Emmanuel
Copyright ANS