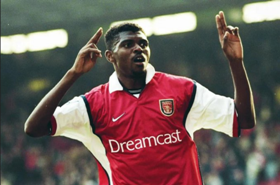 Everton academy product Victor Anichebe has picked Nwankwo Kanu, Didier Drogba and Yaya Toure as his top three African players to grace the English Premier League.
Former Ajax Amsterdam and Inter Milan striker Kanu also wore the colours of West Brom and Portsmouth but he is remembered fondly for his time with Arsenal, with whom he won the Premier League twice.
Anichebe noted that a lot of Africans, Nigerians in particular, started supporting Arsenal because of Kanu's impressive displays at the north London club.
"I came into the national team with Kanu, kind of star-struck when I saw him. The long journey he had in his career in the Premier League," Anichebe told Premier League Productions.

"He got a lot of Africans and Nigerians especially to support Arsenal not just for his performances on the pitch but his Foundation.

"He's one that we love in our country especially. "
Anichebe revealed that Kanu was a skillful player despite his height and also highlighted his physical attributes.
"He had an incredible touch for someone so tall, some people say he was lanky  but he was deceptively strong as well and his general awareness for the game.

"He had so many other qualities he developed over the course of his career, for me it was a pleasure to train with him," concluded Anichebe.
Kanu recorded 273 appearances in the Premier League, scoring 54 goals while providing 29 assists.
Ifeanyi Emmanuel
Copyright ANS