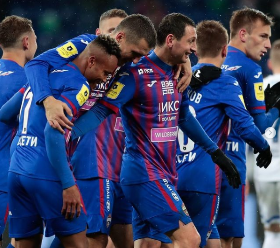 Chidera Ejuke rediscovered his scoring touch on Monday evening as CSKA Moscow defeated FC Rotor Volgograd 2-0 in the Russian Premier League.
It was his first goal for the Army Men since finding the net in a 3-1 win over Dynamo Moscow on October 18, 2020, one hundred and seventy six days ago.
Ejuke had gone 20 matches in all competitions without a goal before he opened the scoring with a right-footed shot from just outside the penalty area in the first minute of first half stoppage time against FC Rotor Volgograd.
CSKA Moscow went on to bag one more goal in the second half, former West Brom and Newcastle United forward Jose Salomon Rondon the scorer.
Ejuke opened his goalscoring account for the Muscovites on his home debut against Spartak Moscow and his two other goals this season were netted in home matches.
This season, the former SC Heerenveen dazzler has played two games for the Nigeria national team - that's how highly rated he is.
Following the win against FC Rotor Volgograd, CSKA Moscow are fourth in the table with 46 points from 25 games.
Ifeanyi Emmanuel
Copyright ANS