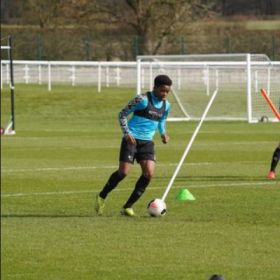 Allnigeriasoccer.com understands that Derby County are on the verge of announcing the signing of promising Nigerian central midfielder Dubem Eze.
Eze began the season with Chelsea's U16 team but was informed by the Stamford Bridge higher-ups that he wasn't going to be offered a scholarship for the 2021-2022 campaign.
Derby County moved fast to secure the signature of Eze by offering him a contract following a successful trial.
The talented teenager will be part of the new intake of academy scholars at Derby County ahead of the start of next season.
It is confirmed that he will sign his first professional contract with Derby County when he turns 17.
Wearing the number 15 jersey, Eze came off the bench to net the winning goal for The Rams in their 2-1 victory over Everton U18s last weekend, scoring three minutes after his introduction.
He is the second Nigeria-eligible teenager to be offered a scholarship for next season, after Bayo Fapetu who has joined the club from Arsenal.
Former Manchester United starlets Ola Ibrahaim and Osazee Aghatise, Festy Ebosele and Josh Shonibare currently play for Derby County's youth teams.
Ifeanyi Emmanuel
Copyright ANS