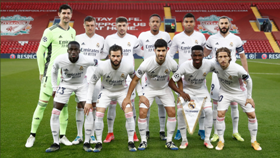 Real Madrid have advanced to the semifinals of the UEFA Champions League following their goalless draw with Liverpool at Anfield on Wednesday night.
There was a first-ever Champions League squad involvement for Spanish-South Korean-Nigerian attacking midfielder Marvin Akinlabi but he remained rooted to the bench for the entirety of the game.
Alvaro Odriozola, Rodrygo and Isco were the three players manager Zinedine Zidane utilised off the bench.
Though the two teams did not have any of their recognized central defenders in the squad, they still played out a goalless draw but it was an entertaining game.
Liverpool couldn't find a way through even though they had opportunities, especially in the first half, but Mohamed Salah and Georginio Wijnaldum couldn't convert, while Roberto Firmino had one after half-time.
Real Madrid go through courtesy of that first leg win, 3-1 at the Estadio Alfredo Di Stéfano on April 6.
Akinlabi will be hoping to be involved in some capacity when the Spanish champions face Chelsea in the semifinal of the Champions League.
Ifeanyi Emmanuel
Photo Credit : realmadrid.com
Copyright ANS