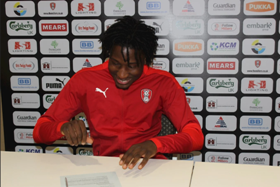 Republic of Ireland U21 international Joshua Kayode has committed his future to Rotherham United by signing a new contract with the Championship club.
The new deal will keep the promising striker at the AESSEAL New York Stadium until the summer of 2024, subject to EFL and FA ratification.
Born in Lagos, Kayode is currently on loan at League Two club Carlisle United, for whom he netted nine goals in 35 appearances across two spells.
Speaking on his new deal, he told Rotherham TV : "I've been here since I was 16. It's the first club I came over here to.

"It feels really good, I'm excited to see what the future holds for me."
With six games to the end of the regular season, Kayode is targeting promotion with Carlisle United, who are only three points off the playoff spots.
"I went there with that in mind to hopefully get promoted and win something.

"If we get to the play-off final and get promoted it will mean it's been a successful loan, and that's my goal now."
The 20-year-old Kayode, who previously had loan spells at Chesterfield and Gateshead, has made three appearances for Rotherham United's first team.
Igho Kingsley
Photo Credit : themillers.co.uk
Copyright ANS