...the complete Nigerian football portal
Subscribe
'I understand the passion' - Everton winger Iwobi on if he has grown to hate Liverpool yet
Published: April 16, 2021 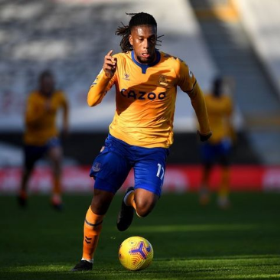 Facing Liverpool in the Merseyside derby is a fixture every Everton fan looks forward to every season.
Former Arsenal winger Alex Iwobi revealed that he has felt the emotions of playing against the Reds, having been a player of Everton for around two years.
Two months ago, the Nigeria international was in the Toffees side that beat Liverpool for the first time at Anfield since 1999, playing the last four minutes of a 2-0 win.
Regardless of what their positions are in the Premier League table, the Merseyside derby means everything to both fans.
Asked if he has grown to hate Liverpool, Iwobi said on Nedum Onuoha's podcast : "I understand the passion, the hate, I am slowly engaging in it a bit more like when we beat Liverpool for the first time is when I actually felt like we've beaten Liverpool, we really hate Liverpool.

"I have been to the city a couple of times."
Due to the rivalry between Everton and Liverpool, sometimes the players get a pat on the back when they meet their own fans but are often treated with disdain by opposing fans, which is totally different from what Iwobi experienced during his days with Arsenal.
"The only difference for me, like you said, in north London you won't really know who you support so you can get by.

"Here in the city of Liverpool, you either have to pick between one or two. People have flags on their windows, people have red or blue cars.

"Even when I went to the shop once, one person refused to serve me because I'm an Everton player," added Iwobi.

Since his move to Goodison Park in the summer of 2019, Iwobi has faced Liverpool four times, and suffered his only defeat, a 5-2 loss at Anfield, on his Merseyside debut.
Ifeanyi Emmanuel
Photo Credit : evertonfc.com
Copyright ANS