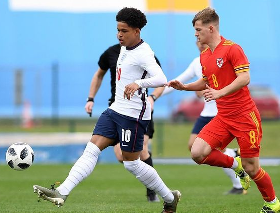 Former Manchester City defender Nedum Onuoha has admitted that he is baffled as to why the Nigeria Football Federation miss out on several dual-eligible players to the English Football Association.
The Nigerian Federation lost out in the race for Arsenal winger Bukayo Saka, Chelsea-owned stars Tammy Abraham, Ross Barkley and Fikayo Tomori and Tottenham Hotspur midfielder Dele Alli.
Onuoha thinks that the NFF don't have a database containing information about players with dual nationality and they usually approach the players to commit their international future to Nigeria when it is too late.
"One thing I find with some players who could play for Nigeria I feel the Nigerian Federation pick them up too late because as you said yourself if you are in England and the letter comes to say you are going to play for England you are just going to be playing for England," Onuoha said on his podcast.

"But in the same time if a letter came from Nigeria and England then you have a decision to make, most people don't get offered that decision until probably it's too late and then the perception is that they just want to go this way or go  that way.

"I don't understand how they can miss so many players sometimes.

"I feel with England if a player has potential to be able to play for England and he's currently playing in Kazakhstan with a Kazakhstani name but he's got like English grandparents, England know about it and he's in the system straightaway but I feel that's not the case back home".
Ten players of Nigerian descent were included in the Young Lions squads for training camps/international matches last month but only two in the shape of Eberechi Eze and Noni Madueke are known to be on the radar of the Nigerian Federation.
Ten Nigeria-Eligible Players Called Up By England in March 2021
1) Eberechi Eze (Crystal Palace) - U21
2) Noni Madueke (PSV Eindhoven ) - U21
3) Miguel Azeez (Arsenal) - U19
4) Daniel Oyegoke (Arsenal) - U18
5) Carney Chukwuemeka (Aston Villa) - U18
6) Sam Edozie (Manchester City) - U18
7) Shola Shoretire (Manchester United) - U18
8) Tobi Oluwayemi (Glasgow Celtic) - U18
9) Zach Awe (Arsenal) - U17
10) Michael Olakigbe (Fulham) - U17
Ifeanyi Emmanuel
Photo Credit : instagram.com/sholashoretire
Copyright ANS